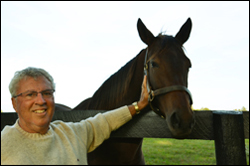 Barry Meadow has been on a dual track—gambling, and writing about gambling—for more than 50 years.  His first book, Success At The Harness Races, was published in 1967, when he was still too young to legally bet on the races at his favorite tracks, Yonkers and Roosevelt, although that didn’t stop him.

For five years in the 1980s, he gambled full-time on the harness races in California.  This led to his writing Professional Harness Betting, a 300-page manual which explains how to become a full-time professional player.

With far bigger pools available at the thoroughbreds, he decided to switch to the runners.  And while making that transition, he wrote Money Secrets at the Racetrack, which has been lauded by virtually every expert as the definitive guide to money management at the track.  He also launched Master Win Ratings, a service that rated every California horse and which he produced until his retirement in 2011.

For seven years, from November 1996 through October 2003, he published Meadow’s Racing Monthly, an award-winning handicapping and money-management newsletter.  It featured articles on how to make the most money at the track, investigative exposes about the handicapping world, original statistical research, and systems tests from a large computer database.  He also authored a number of handicapping booklets, including Secrets of the Pick 6 and Players Guide to Nevada Racebooks.

He also found time to write Blackjack Autumn, the humorous and exciting story of his two-month quest to play blackjack in every casino in Nevada.

More recently, he wrote a column from 2004 through 2017 for American Turf Monthly, and remains a frequent contributor to the Horseplayers Association of North America magazine.

Meadow was a speaker at every Handicapping Expo since 1990 and was a member of the NTRA Players Panel.  He’s testified as a players’ advocate on several issues before the California Horse Racing Board, and was part of the negotiating team which helped bring the low-takeout Players Pick 5 to the state.  He was featured in the 2007 documentary, Players: The Blue Collar Gambler.  In 2014, he won the inaugural Ron Rippey Award for Handicapping Media for the best published article about handicapping.